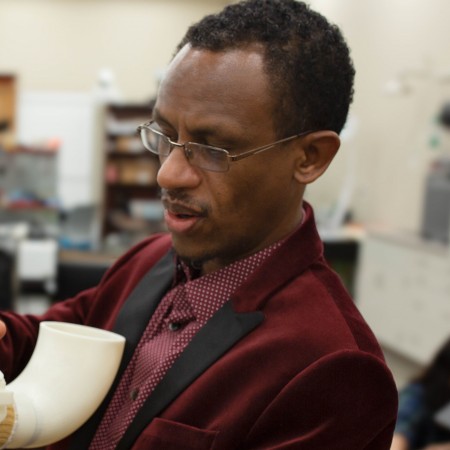 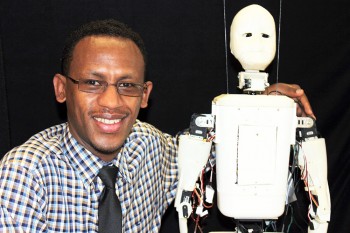 Two rising stars in research at UT Dallas have been recognized for their promise and creativity.
Dr. Yonas Tadesse and Dr. Majid Minary, of the Erik Jonsson School of Engineering and Computer Science, have been named recipients in the 2015 Young Investigator Program (YIP) by the Office of Naval Research, and will receive up to $170,000 a year in funding for three years.

YIP seeks to identify and support academic scientists and engineers who are in their first or second tenure-track appointments. This is the second consecutive year that two Jonsson School faculty members have received YIP awards. 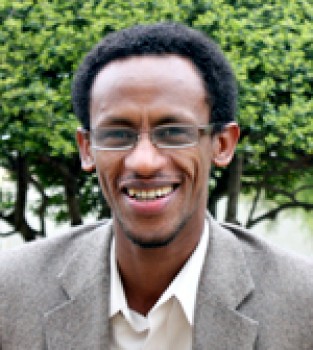 Researchers at The University of Texas at Dallas and Virginia Tech have created an undersea vehicle inspired by the common jellyfish that runs on renewable energy and could be used in ocean rescue and surveillance missions.

In a study published this week in Smart Materials and Structures, scientists created a robotic jellyfish, dubbed Robojelly, that feeds off hydrogen and oxygen gases found in water.

“We’ve created an underwater robot that doesn’t need batteries or electricity,” said Dr. Yonas Tadesse, assistant professor of mechanical engineering at UT Dallas and lead author of the study. “The only waste released as it travels is more water.”

Researchers Showcase Labs, Latest Advancements at Science in the City 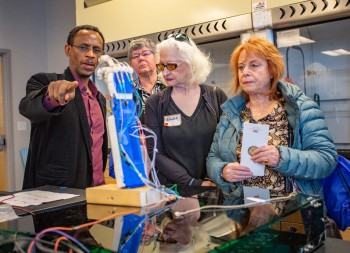 The University of Texas at Dallas teamed up with The Dallas Morning News to give the public a chance to see the research being done on campus during Science in the City on March 30. Scientists, graduate students and professors showed off their work in bioengineering, nanotechnology, mechanical engineering and neuroscience to groups of eager participants.


Dr. Shalini Prasad, Cecil H. and Ida Green Professor in Systems Biology Science in the Erik Jonsson School of Engineering and Computer Science, and her team presented a device that detects pesticides in produce.


Dr. Ray Baughman, director of the Alan G. MacDiarmid NanoTech Institute and the Robert A. Welch Distinguished Chair in Chemistry in the School of Natural Sciences and Mathematics, and his team demonstrated how to make artificial muscles from nylon fishing line, while Dr. Yonas Tadesse, associate professor of mechanical engineering, showed how he uses those muscles in his robotics research.


Dr. Ted Price BS’97, Eugene McDermott Professor of neuroscience in the School of Behavioral and Brain Sciences, showcased his research on pain in the Bioengineering and Sciences Building. Participants also toured the new Engineering and Computer Science West building and saw a demonstration of a self-driving robotic car in a session led by Dr. Tyler Summers, assistant professor of mechanical engineering. 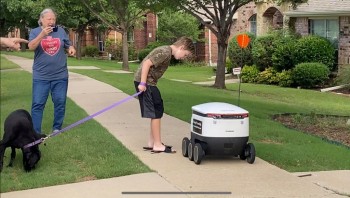 The robots are helping people practice those social distancing guidelines but experts also said it could also be paving the way for how we could do business even after this is all over.

The service robots are the pride and joy of California-based Starship Technologies. The company normally has a contract to make food deliveries on UT Dallas’ campus and has been operating on campus for the last several months.

But since campus closed down due to the pandemic, they've accelerated a plan they already had to expand to Frisco.

“It’s sort of gave us the opportunity to expand or accelerate what was kind of already our long-term plan, which is to take this delivery service to local neighborhoods,” said Rob Buehler, director of sales for Starship Technologies.

This tech is nothing new. Many companies have utilized artificial intelligence in various ways over the years. These particular service robots with Starship Technologies, which launched in 2014, have been working on university campuses and cities across the country and world for the last few years.

The company typically operates food and grocery delivery on university campuses before expanding into neighboring cities. The inside cabin of the robot is insulated and there are slots to secure products and keep beverages upright. Robots are also sanitized, monitored and picked up at the end of the day by a Starship team based in Dallas.

Orders are placed on the Starship Deliveries app on a smartphone and all of the payment and processing is handled electronically.

“It’s a little bit like Uber. They drop a pin in the app to let us know where they’re located," said Buehler. “We’ve done over 100,000 deliveries with the robots, we’ve traveled over 500,000 miles, and crossed 5 million streets. So in a lot of ways, the future is here."

UT Dallas mechanical engineering professor Yonas Tadesse said the pandemic has called attention to the need for this type of contactless technology.

"Robots and autonomous system can help in many ways. We are replicating ourselves in these machines," he said.

He’s been studying robotics for the past 15 years and has been working with students on developing humanoids, biorobots and smart systems in a lab at UTD. Some can portray emotion using mechanics that mimic human expressions while others can pick up objects the way a human can.