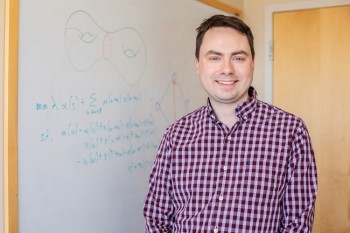 Dr. Kyle Fox, assistant professor of computer science in the Erik Jonsson School of Engineering and Computer Science at The University of Texas at Dallas, recently received a five-year, $586,654 National Science Foundation Faculty Early Career Development (CAREER) Award to explore how the mathematical field of topology can be used to design more efficient and faster algorithms to solve difficult problems.

Topology is the study of the properties that geometric objects maintain after undergoing certain changes. In a commonly used example, a coffee cup can be reshaped into a doughnut yet still retain similar properties, such as having one hole. Computational topology, the study of computer algorithms for topological problems, is an emerging field. Fox, who joined the University in 2017, researches algorithmic foundations of computer science and their relationship to geometry and topology.