Adjunct
The University of Texas at Dallas [2012–Present]

This video & paper describes and demonstrates an autonomous robotic team that can rapidly learn the characteristics of environments that it has never seen before. The flexible paradigm is easily scalable to multi-robot, multi-sensor autonomous teams, and it is relevant to satellite calibration/validation and the creation of new remote sensing data products. A case study is described for the rapid characterisation of the aquatic environment, over a period of just a few minutes we acquired thousands of training data points. This training data allowed for our machine learning algorithms to rapidly learn by example and provide wide area maps of the composition of the environment. Along side these larger autonomous robots two smaller robots that can be deployed by a single individual were also deployed (a walking robot and a robotic hover-board), observing significant small scale spatial variability.

My work is in the area of Applied Physics with a focus on remote sensing from robotic aerial vehicles and satellites, Machine Learning, BigData, with societal applications. My education was completed in England, a First Class Double Honors B.Sc. in Physics and Chemistry from King’s College London (1987) with the Sambrooke Exhibition Prize in Natural Science, and a Ph.D. in Physical Chemistry from the University of Cambridge, Churchill College (1991). My thesis described the first atmospheric ozone photochemical scheme for the European Center for Medium Range Weather Forecasting (ECMWF) numerical weather prediction model, used to study the mechanisms of ozone depletion. The ECMWF is the world’s premier meteorological agency. I held post-doctoral positions at the University of Cambridge until receiving a ten year Royal Society University Research Fellowship in 1996 (also at Cambridge). From 1998 to 2000 I held a joint position at Cambridge and the University of Tel-Aviv as a senior lecturer and Alon fellow in the Department of Geophysics and Planetary Space Science. An Alon Fellow is the highest award Israel can give a young scientist. In 2000 the chief scientific adviser to the British Prime Minister and Head of the British Office of Science and Technology, Professor Sir David King, recommended me to be appointed as a Cambridge University lecturer in the country’s first Institute for Chemical Informatics. In 2001 I was invited to NASA Goddard Space Flight Center, joining UMBC/GEST as the first distinguished NASA Goddard fellow in earth science. My software has received five NASA awards and has been recommended for the NASA Software of the Year Award. I have received three prestigious fellowships, six editorial commendations, a paper prize, over five million dollars in research funding, and six NASA awards.  As of July 1, 2018, Google Scholar lists 165 publications with a total of 3,770 citations and a Hirsch index of 28. They have received five editorial commendations and a paper prize.  In 2010 I joined UTD, became a scholar of the Institute for Integrative Health, and the founding director of the Center for Multi-Scale Integrated Intelligent Interactive Sensing (MINTS). The vision of MINTS is a holistic intelligent synergy of integrated, targeted observations from multiple platforms on multiple spatial and temporal scales, together with state of the art compression and visualization systems for the distribution and comprehensive analysis of complete datasets. By combining instruments on satellites and robotic vehicles (in air, land, and sea) that can be directed in real time, we can capture observations on multiple parameters on multiple spatial and temporal scales appropriate to a wide range of problems.  Currently, I am focusing on the use of applied physics. Particularly remote sensing from aerial vehicles and satellites, deploying large sensor networks (Internet of Things), the use of multiple big datasets and machine learning for societal benefit. The areas of application range from Public Health, to drought and fire, to agriculture and responding to oil spills.

Atmospheric Chemistry, Geophysics Are Among Dr. David Lary's Interests Dr. David Lary, an atmospheric scientist whose career has taken him from Cambridge University and Tel Aviv University to NASA, has landed at UT Dallas, where he joined the physics faculty. Read more... 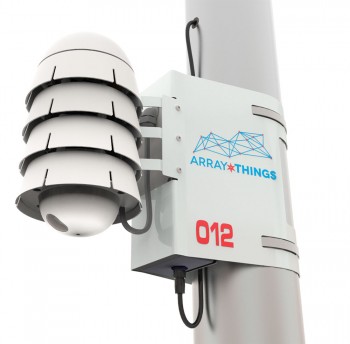 “Online maps are accessed millions of times daily by people using computers and mobile devices to find the shortest or least congested route to their destination,” said Dr. David Lary, associate professor of physics at UT Dallas. “But suppose you have asthma, or want to take a newborn out for an impromptu walk and you’re looking for the least polluted route? We think we can help with that.”

A University of Texas at Dallas research group has developed an autonomous robotic team of devices that can be used at hazardous or difficult-to-reach sites to make surveys and collect data — providing more and faster insights than human beings are able to deliver.

Dr. David Lary, professor of physics in the School of Natural Sciences and Mathematics, said his group’s robot teams — composed of autonomous devices that gather data on the ground, in the air and in water — would be ideally suited for hazardous environmental situations and/or for holistic environmental surveys of ecosystems.

“An autonomous team like this could do a survey and rapidly sample what’s in the air and the water so that people could be kept out of harm’s way,” Lary said. “In another context, the robots could provide a general survey of ecosystems, or they could look at situations such as harmful algal blooms in lakes.”