Dr. Prasad is the Director of the Biomedical Microdevices and Nanotechnology Lab which has supported over 15 graduate researchers and over 20 undergraduate researchers over the last 7 years. Dr. Prasad's research interests are multi-disciplinary. They include the engineering of multi-functional nanomaterials for designing portable, “point-of-care” devices and platforms for cellular and molecular diagnostics. Her current research interests focus on addressing public health challenges of rapid and cost-effective diagnostics that has applicability in the diagnosis of various diseases such as cancer, neurodegenerative diseases, and cardiovascular diseases. Dr. Prasad’s research laboratory has been actively participating in developing translational technologies for affordable molecular diagnostics platforms. Her research work has been supported by a number of federal and state agencies as well as corporate entities. She has over 30 peer reviewed journal publications. Her work has also been reported and covered in popular press. She is the recipient of a number of awards in the area of nano-biotechnology.

A research team at The University of Texas at Dallas has created a first-of-its-kind sensor for real-time measurements of carbon dioxide and relative humidity — using a technique conceived while washing dishes.
“As environmental concerns continue to mount, we’re seeking new ways to monitor atmospheric conditions,” said Dr. Shalini Prasad, Cecil H. and Ida Green Professor in Systems Biology Science and the interim department head of bioengineering in the Erik Jonsson School of Engineering and Computer Science. “With this prototype, we’ve created something appropriate for usage in automobile and smart-phone manufacturing, as well as in the monitoring of energy-efficient buildings — all enabled through the internet of things.”

Marijuana is the most commonly used illicit drug in the U.S. As states grapple with marijuana laws, public safety agencies face challenges in identifying those driving under its influence.

Researchers at The University of Texas at Dallas have created a sensor that uses saliva to rapidly report — within one minute — a subject’s level of THC, the psychoactive component in marijuana.

Their proof-of-concept study, published in September in Nature Scientific Reports, could clear the way for a new roadside DUI assessment for THC that works in much the same way as testing for alcohol impairment. 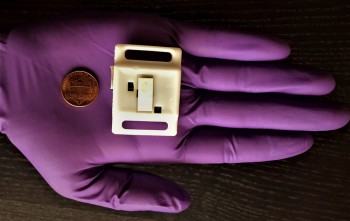 University of Texas at Dallas researchers have designed a wearable device that monitors sweat for biomarkers that could signal flare-ups of inflammatory bowel disease (IBD).

A team of bioengineers demonstrated the wristwatch-like device in a proof-of-concept study funded by the Crohn’s & Colitis Foundation and published online July 28 and in the October print edition of the foundation’s journal, Inflammatory Bowel Diseases.

A sensor in the device detects and quantifies the presence of two key biomarkers associated with inflammatory bowel disease: interleukin-1β and C-reactive protein (CRP). The study is the first to establish that CRP is present in human sweat and the first to show that the two biomarkers can be detected in sweat.

Dr. Shalini Prasad, department head and professor of bioengineering in the Erik Jonsson School of Engineering and Computer Science and the study’s principal investigator, said the technology could provide a warning but not a diagnosis of inflammatory bowel disease. The ultimate goal of the work is to develop a device to help patients gain more control over IBD, which can be unpredictable.