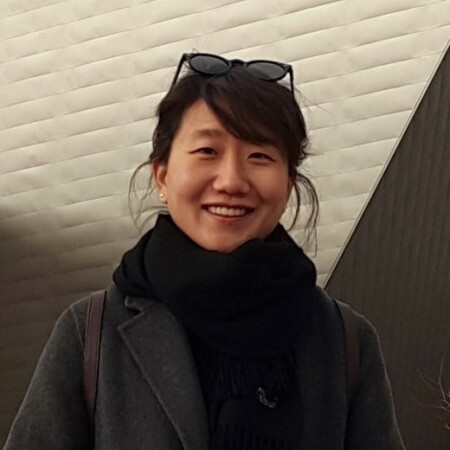 Premiered at Theatre UTD (Feb, 2022), Blue Jelly is an original performance written and directed by Thomas Riccio, in audiovisual collaboration with Laura Hyunjhee Kim. Blue Jelly: Sensoria is an
experimental video project that responds to the collective creative discoveries that were made during the process of developing the live production. The project aims to disrupt narrative conventions and structural linearity to explore the sensorial meta-qualities of the experiential phenomenon of “déjà vu.” Centering performers and video cameras as key witnesses to an inexplicable and unnamable happening, the work will potentiate future research towards envisioning new hybrid forms of immersive multimedia performances.

Flock as Emergent Turn in Narrative (2022)

————————————
Practice-based research duo Laura Hyunjhee Kim and Kevin Sweet remix and riff on critical theory and media references in a playful practice of speculative nonfiction storytelling—navigating the in-between-spaces of creative, academic, and community-oriented research. Their ongoing multimedia project titled “Flocks as Emergent Turn in Narrative” introduces a new speculative methodology (“Pigeonology”) as a form of living-research that is fluid: a growing organism of thoughts, concepts and ideas that is rather emergent, rhizomatic, and nonlinear. Pigeonology is used to reveal the persistent enmeshing of nonhuman constituents that are otherwise hidden within human frameworks of power, memory, and politics. By making this process alive, Kim and Sweet aim to challenge the universal narratives of human/nonhuman relationships (“Pigeonholing”) through site-specific local acts of playful participatory investigation and observation.

Laura Hyunjhee Kim is a Korean-American multimedia artist who reimagines on/offline (non)human interactions and feelosophical experiences of the body. Thinking-through-making, she creates performances and performs moments of incomprehension: when language loses its coherence, necessitates absurd leaps in logic, and reroutes into intuitive and improvisational sense-making forms of expression. Bending and blending pop cultural tropes that playfully engage with the amateur aesthetics of the internet, she utilizes consumer electronics in production and draws inspiration from viral memes, lo-fi pop music, found-footage film, and kitschy low-budget commercials. As an avid cross-disciplinary pollinator, collaborator, and storyteller, her ongoing projects thematically focus on blobology, feelosophy, pigeonology, and digital technology.

Kim has shown work around the world, recently including the Transfer Gallery, Pioneer Works, Telematic Media Arts, Harvestworks, Bienal Internacional de Curitiba, Athens Digital Art Festival, Centro Cultural São Paulo, and The Wrong Biennale. Her projects have also appeared in the Lumen Prize for Art and Technology collection, The Denver Post, Westword, ArtSlant, Hyperallergic, KQED, Daily Serving, San Francisco Chronicle, and The Creators Project. She was in the 2020-2021 revival of the Got Milk? campaign and her social media performance was broadcasted nationwide on TV and various online streaming services. Kim was an artist in residence at the Internet Archive (2017), Korea National University of the Arts (2017), and Electrofringe (with libi rose striegl as the collaborative duo sharing turtle™, 2019).

Kim’s music video art SHARING IS CARING received the inaugural ArtSlant Award in New Media (2013) and her short feature video Marvelous Miramol was the first moving image to receive the Wisconsin Union Directorate Art Committee’s Sally Owen Marshall Best in Show Award (2010). In 2019, she received the New Media Caucus Distinguished Scholar Award. In 2020, she was a recipient of the Judson-Morrissey Excellence in New Media Award and also the Black Cube Video Art Award for her video Cricket World.

Kim is the author of Entering the Blobosphere: A Musing on Blobs (The Accomplices / Civil Coping Mechanisms, 2019) and the coauthor of Remixing Persona: An Imaginary Digital Media Object from the Onto-tales of the Digital Afterlife (Open Humanities Press, 2019).

Kim received a BS in Art from the University of Wisconsin-Madison, MFA from the New Genres Department at the San Francisco Art Institute, and PhD in Intermedia Art, Writing and Performance (IAWP) from the College of Media, Communication and Information (CMCI) at the University of Colorado Boulder. Kim is an Assistant Professor of Visual and Performing Arts at The University of Texas at Dallas.

Kim lives and works in the company of neighboring birds, squirrels, and wild rabbits of Texas.

Kim's work encapsulates a sensibility of pop culture from both regions [US and South Korea]. Her videos offer a meta ventriloquism that harks back to the likes of Max Headroom, but with a visual touch of Lisa Frank. - Dorothy S. Santos, Bay Area Digitalists, 2015

Read this book! It is full of wonders. I love the way it takes theory-izers (Haraway, Hugo Ball, Solnit, Adorno, Jung, Arendt…) and playfully inflects them as blobists—which is to say that Laura Hyunjhee Kim shows how great thinking/writing is quite often a wrestling with the ubiquitous presence of the morphing, ubiquitous shape of a blob. – Jane Bennett, author of Vibrant Matter: A Political Ecology of Things, 2019

Laura Hyunjhee Kim studies the realness of digital spaces and caring for our physical bodies in an increasingly virtual world.
…
Kim’s work blends these realities by guiding us through a haptic experience—the feeling of lotion in your hands—presented via a handy digital medium—the “rectangle.” “I want art to be close,” she says. “It has to be part of my life; it has to be immediate.” In these “unreal” times, going back to the body—even if it’s through your phone—may be the affirmation we need. To sit with our grief, our discomfort, and then laugh into the glow of our screens. — Natalie Hegert, Southwest Contemporary, 2021

The University of Texas at Dallas welcomed 25 new tenured and tenure-track faculty members in 2021, with many of them joining the University this fall.