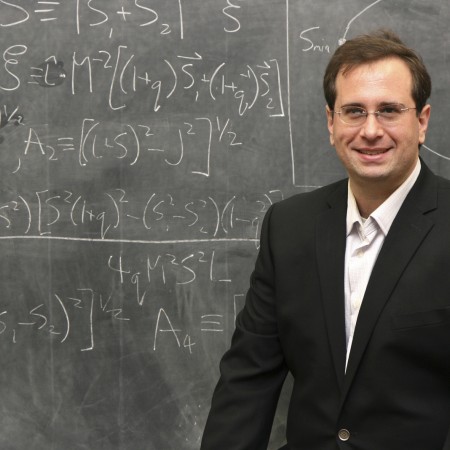 Black holes are compact objects predicted by Einstein's theory of general relativity whose gravity is so intense that they possess event horizons.  I am interested in using astrophysical observations to predict where and how often these black holes merge with each other and using tools of general relativity such as post-Newtonian expansions, numerical-relativity simulations, and black-hole perturbation theory to calculate the electromagnetic signatures and gravitational waves produced in such mergers.

Stars that wander too close to supermassive black holes will be disrupted when the black hole's gravitational tidal field overwhelms the star's self-gravity. Some of the debris from the tidally disrupted star will be accreted by the black hole, powering a bright electromagnetic flare that can be observed in X-rays, ultraviolet radiation, and optical light.  Relativistic effects may strongly affect both the rate and light curves of tidal disruption events.  I am interested in calculating these relativistic corrections in time for upcoming optical and X-ray surveys like LSST, Gaia, WFIRST-AFTA, and eROSITA.

New research by an astrophysicist at The University of Texas at Dallas provides revelations about the most energetic event in the universe -- the merging of two spinning, orbiting black holes into a much larger black hole.

“There are a number of different theories about what dark matter could be, but we think one alternative might be very small primordial black holes.”

No Extra Gravity for Dark Matter

Darth Vader might be disappointed to hear it, but the force of gravity does not have a dark side. Dark matter does not pull on other dark matter with any extra gravity or additional force

One of the most powerful events in the universe occurs when two black holes collide. Now, scientists have taken a closer look at this event and have learned a bit more about what happens when two orbiting black holes become one.

Researchers Are Putting a Multidisciplinary Spin on Teaching Physics

UT Dallas researchers are launching a three-year research project that uses specialized computer programs to teach children physics, thanks to a recent grant of more than $1 million from the National Science Foundation’s STEM + Computing (STEM+C) program.
The study, Scaffolded Training Environment for Physics Programming (STEPP), will test a novel approach for teaching physics to high school students — computer-based learning programs that require no prior coding experience.

REU Site: Summer Research Program in Experimental & Theoretical Physics at The University of Texas at Dallas