Some of her research interests involve Correlates of Aging and speech perception performance, demographics of hearing loss in indigenous populations; cultural influences in help seeking behaviors, effects of noise exposure on emotional, cultural and audiological outlook for adults; improving, updating and confirming efficacy of Clinical Measures used in Audiology practices for adults and pediatric populations. She maintains her international research perspective with collaborations with The University of The Witwatersrand and University of Pretoria in South Africa.

Some of the research interests involve an in depth look at pediatric audiology and broad-based clinical audiological practice to differentiate and or predict types of hearing loss. More specifically by looking at the effects of lifestyle, alcohol, tobacco, childhood exposure to noise on a person's ability to understand speech in noise, and whether objective measures correlate closely to self-report. In addition, there is an interest in pursuing modifying parameters of the distortion product and transient evoked otoacoustic emissions to aid in differentiating or predicting specific types of hearing loss. There are occasions when analyzing the auditory brainstem evoked responses become helpful as well to differentiate and predict specific types of hearing loss or hearing disorders.

Audiology Then, Now, Here and There

Dr. Jackie Clark joined the Doctor of Audiology Program faculty in 1997, and is currently Clinical Associate Professor UT Dallas' School of Brain & Behavior Sciences. In addition she has been awarded an appointment as Research Scholar with The University of The Witwatersrand, School of Speech and Hearing Therapy in Johannesburg, South Africa.

When in Texas, she carries a full teaching load and active clinical caseload involving pediatric assessment and remediation as well as adult. Dr. Clark is a fellow of the American Academy of Audiology, board certified with the American Board of Audiology, holds the Certificate of Clinical Competence from the American Speech-Language-Hearing Association in Audiology, and is licensed to practice Audiology and dispense hearing aids in the State of Texas and Louisiana. She earned a BS degree from Colorado State University, a MS degree from UT Dallas with dual emphasis in Speech Language Pathology and Audiology, and PhD from UT Dallas. 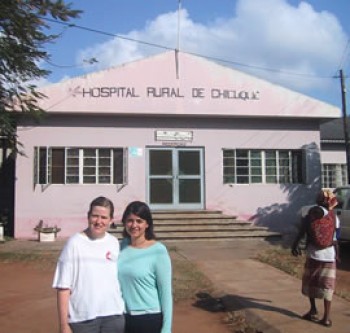 Malaria, 60 indigenous languages and fundraising are just a few of the obstacles that audiologist Jackie L. Clark faces on her annual humanitarian visits to Mozambique to provide audiology services. The professor at UT Dallas’ Callier Center for Communication Disorders is well-equipped to take on the challenges. Her first trip was in 1998 after an invitation from fellow church members in Dallas who had traveled to Chicuque, Mozambique, to teach English the previous year. Clark e-mailed the missionary nurse at the Chicuque Rural Hospital to learn more about the community’s needs. “It's a teaching hospital that trains nurses. I told them I was an audiologist and would be happy to do some training with their medical technicians or whatever the need might be,” she said. “I had no idea what was possible.” 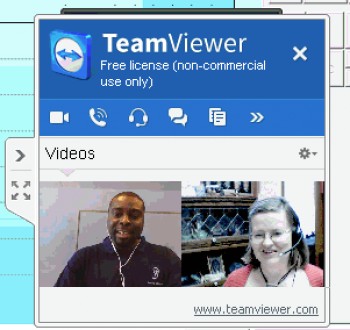 Helping those with hearing problems in Zambia, a developing country larger than Texas with more than 14 million people, requires organization and technical prowess.

Clark, a clinical associate professor in the School of Behavioral and Brain Sciences, has helped Dr. Alfred Mwamba establish a teleaudiology practice over the past year in the landlocked, south-central African country. 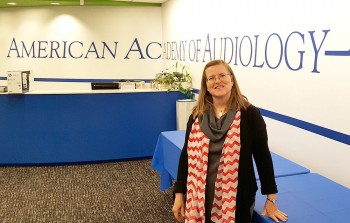 As a child, clinical professor Dr. Jackie Clark was taught to serve other people. Now, in a new leadership role with a major audiology professional organization, she has the opportunity to positively impact an entire profession.

Clark MS'87, PhD'95 recently was chosen president-elect of the American Academy of Audiology (AAA). Her term began in July and will be followed by one year as president and another year as past president. 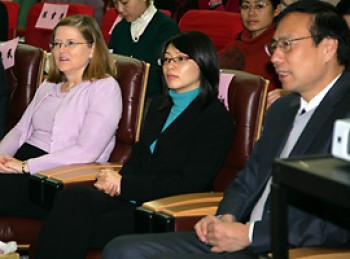 Dr. Jackie Clark, clinical associate professor in the doctor of audiology program at the UT Dallas Callier Center for Communication Disorders, traveled to Beijing recently to lay the foundation for research collaboration in audiology and to exchange information with her Chinese counterparts.

Clark was joined by Dr. Lucy Liu, a UT Dallas alumna who studied under Clark and now works in Dallas as an audiologist and speech-language pathologist.

“China is at a critical crossroads for hearing healthcare professionals,” said Clark. “There are so few audiologists but many more otolaryngologists, who are medical doctors that specialize in the discipline of audiology. Defining the roles of the different professionals so that they can better serve the large population is the biggest need at the moment.”